"My only regret is not hitting that asshole in the face," fumed Paris Saint-Germain superstar Neymar, hours after his team's Ligue 1 clash with Marseille  was marred by violent scenes at the end with five players sent off for their involvement in a mass brawl. The world's most expensive player was the last to see a red card on Monday after he was caught striking Marseille defender Gonzalez on the back of the head. Neymar later explained that Gonzalez directed a racial slur at him during the game. "Now I want to see the image of the racist who called me a 'MONKEY SON OF A B*TCH.' I'd really like that! If I do a 'rainbow flick' you punish me. For a slap, I'm sent off. And them? So what?" the striker wrote on Twitter.

Ligue de Football Professionnel (LFP) was obviously not impressed. The French league governing body announced on Wednesday that Neymar will be banned for two games. It also included a one-match suspended ban in his punishment, which will come into force if he indulges in more foul play in his first game back once the sanction is completed. 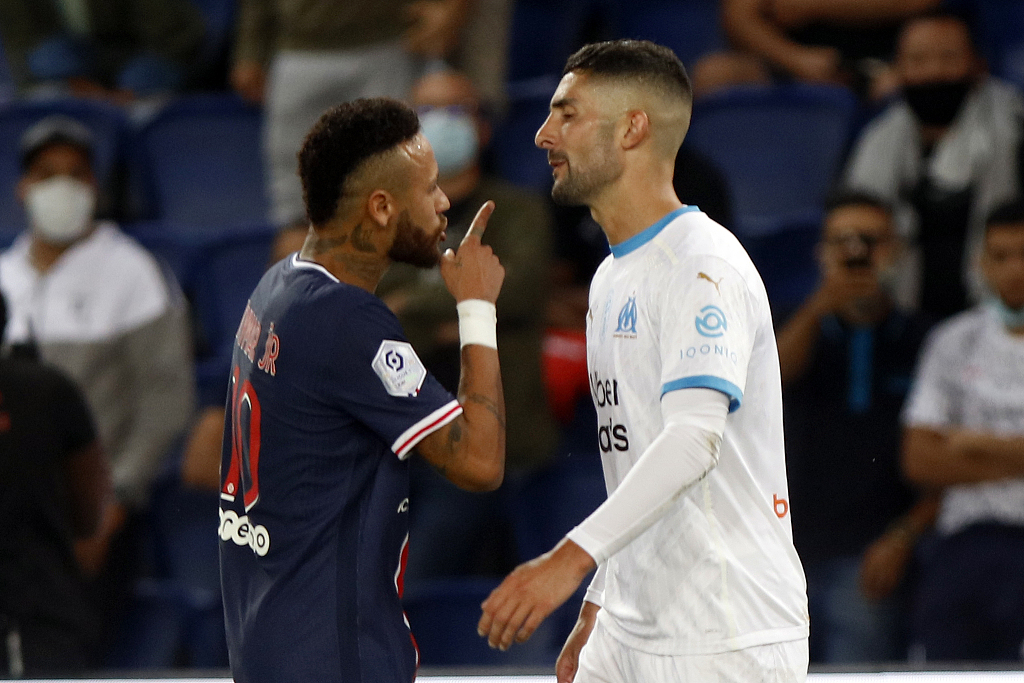 The LFP added that they would investigate claims Gonzalez racially abused Neymar. "We know there was an exchange of words. But right now, there isn't enough certainty to call in the players," said Sebastien Deneux, president of the disciplinary commission.  The controversy raged on. Marseille claimed Gonzalez has received death threats after his personal telephone number was published on social media. Marseille coach Andre Villas-Boas also attempted to defend Gonzalez, suggesting he didn't believe Gonzalez was guilty of making racist remarks. "I don't think so, because Alvaro is an experienced player. There is no room for racism in football, but I don't think that's it," he observed. Marseille also released a statement, claiming "Alvaro Gonzalez is not racist, as he has shown through his daily behavior since joining the club, and as his team-mates have already confirmed." 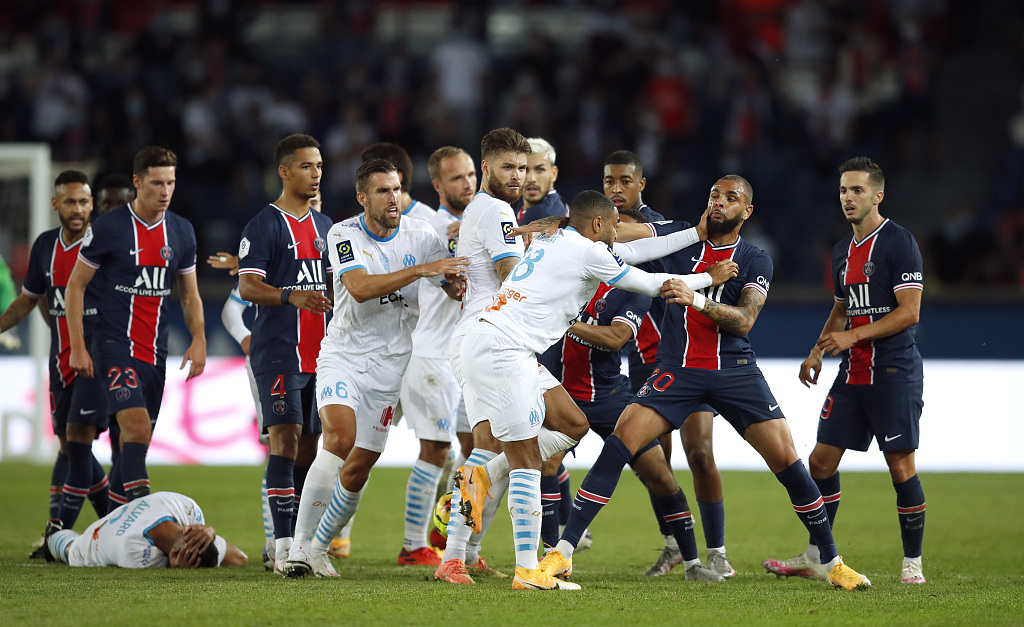 PSG and Marseille players scuffle at the end of the Ligue 1 clash at the Parc de Princes stadium, Paris, France, September 13, 2020. /VCG

While it still remains to be seen whether Gonzalez has crossed the line, French Football Federation President Noel Le Graet added fuel to the fire by insisting that racism doesn't exist in football. "When a black player scores a goal, the whole stadium is on its feet," said Le Graet during an interview with France's news channel BFM Business. "This phenomenon of racism in sport, and in football in particular, does not exist at all or barely exists." Le Graet's remark stood in sharp contrast to what Sanjay Bhandari said earlier this year.  Bhandari, who heads Kick It Out, a UK organization that works to tackle discrimination in professional and grassroots football, told CNN in February that racism in the sport is "worse now than it was five years ago." "Football is very different to what it was in the 1970s, racism is not the endemic thing that it was in the 1970s," he said. "Over a 40, 50 year period? We've definitely [made progress]. But it's worse than it was five years ago, and it's worse than it was seven years ago."

General view of the Kick It Out painted signage on the stadium wall during the Premier League match at Stamford Bridge, London, England, August 18, 2019. /VCG

According to the organization, reports of discrimination rose by 32 per cent in 2018/19 compared to the previous season. Racism remains the most common form of discrimination and has risen alarmingly. The trend was supported by figures released by the UK Home Office, who said more than 150 football-related racist incidents were reported to police last season, a rise of more than 50 percent on the year before and more than double the number from three seasons ago. In response, the Premier League has launched "No Room For Racism" campaign to tackle the problem. Senior stewards in the stadiums have been trained in evidence-gathering at matches through the use of technology to inhibit offending behavior and aid the identification of offenders. However, it's far from enough. Incidents of racism still repeatedly happened in English, French and Spanish leagues and some players have become wearied of the general tepid reaction to racism and slammed the football authorities for leaving black players to face racism alone. 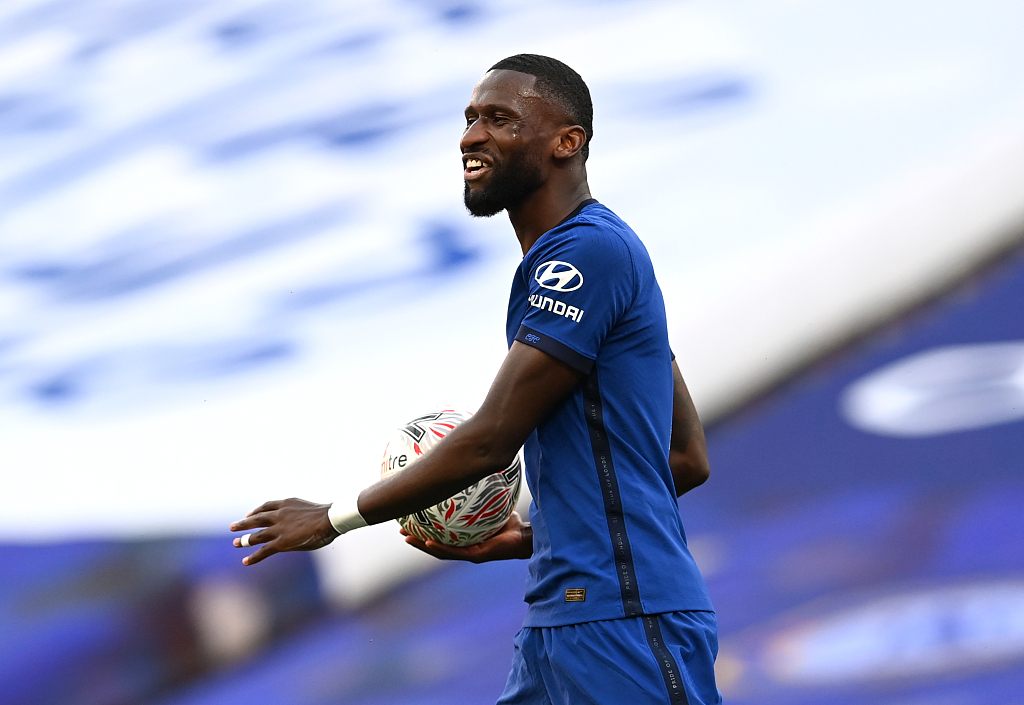 "It's nice if people are speaking up for me but at the end of the day, it just replays. Authority wise I'm alone. I heard about it [being booed]. It's sad. I don't know why they would. Maybe it's because I voiced about the racism," said Chelsea defender Antonio Rudiger back in February when he was booed by Tottenham fans at Stamford Bridge. "The support from my club was there. Also players and everything. For me this was not enough. These people need to be punished. They need educating. It's a lack of education, simple. We all, even including you, we all failed in this." "But nothing happened and, to be honest, it was not a surprise. For me, it was not a surprise, because they always get away with it. Not always, sometimes they get punished, but mostly they get away with it," he added.