The Chinese Football Association (CFA) has given its backing to coach Li Tie amid reports that the former Everton player has been rewarded with a new contract for guiding China into the final stage of qualifiers for the Qatar 2022 World Cup.

Li was parachuted in to reverse China's fortunes after Italian tactical maestro Marcello Lippi failed to instigate improvements within a limited squad and tended his resignation in November 2019. The leadership change proved to be quite a shrewd move as China have won four games in a row under Li and sneaked into the last 12 as one of the best runners-up.

"As long as the team is progressing on the right track, we will let the coaching staff do their job in a stable environment and not change the head coach even if he oversees a defeat or two," said CFA president Chen Xuyuan. "So there is no need to discuss whether we will renew Li Tie's contract or not. Now he is leading the team to prepare for the third round of the World Cup qualifiers with the utmost effort." 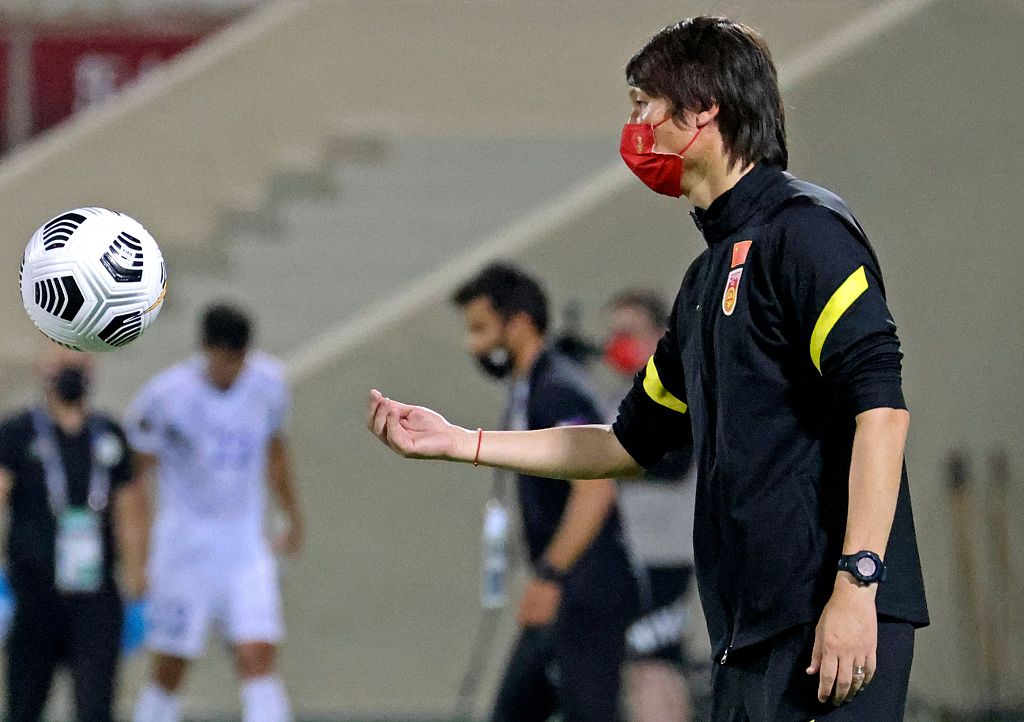 Team Dragon were supposed to play their last four games of the second round in Suzhou, east China's Jiangsu Province, but after routing Guam at home they were forced to relocate to Sharjah in the United Arab Emirates after a dramatic change due to the COVID-19 pandemic.

Chen revealed that he had urged Li to smile more despite the loss of home advantage and create a relaxing atmosphere during the qualifying campaign.

"When we found out that the team will move to the UAE, some of our players had experienced mood swings and the training session was affected," he said. "It's pretty normal considering the circumstances. The players don't know what's going to happen next and are probably thinking more about how to deal with the uncertainty. 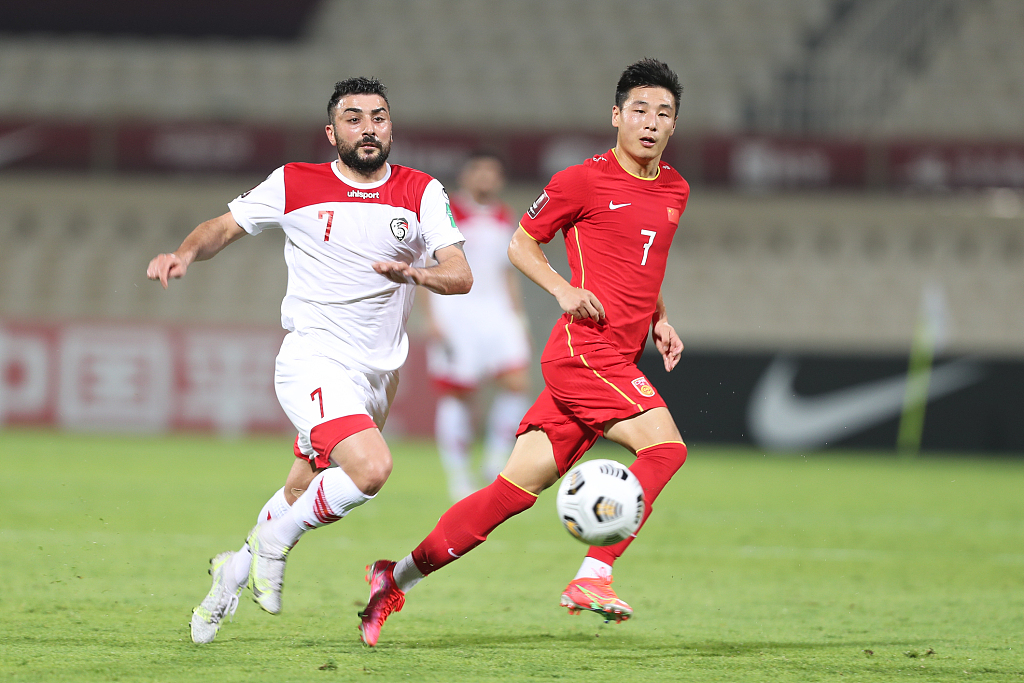 China's Wu Lei (R) sets up an attack from midfield during their 2022 World Cup qualifier against Syria at the Sharjah Football Stadium in Sharjah, the United Arab Emirates, June 15, 2021. /CFP

"This sudden change also affected the managerial team and Li Tie was under immense pressure. So when I was in Sharjah, I told Li to take it easy. I said he should laugh heartily and unload all his worries. Let everyone share the pressure as we are in the same boat."

Chen also singled out Wu Lei for praise as the Espanyol striker played a vital role in China's late revival. He declared the CFA will encourage more players to play in foreign leagues after witnessing Wu's stunning progress.

"If Wu Lei hadn't gone to play overseas, he would still be a good player, but he wouldn't have reached the heights he has today," mused Chen. "But only one Wu Lei is definitely not enough and we have started a program to incentivize more players like Wu to explore the outside world. I hope that within this year or early next year, we will have four or five people playing abroad." 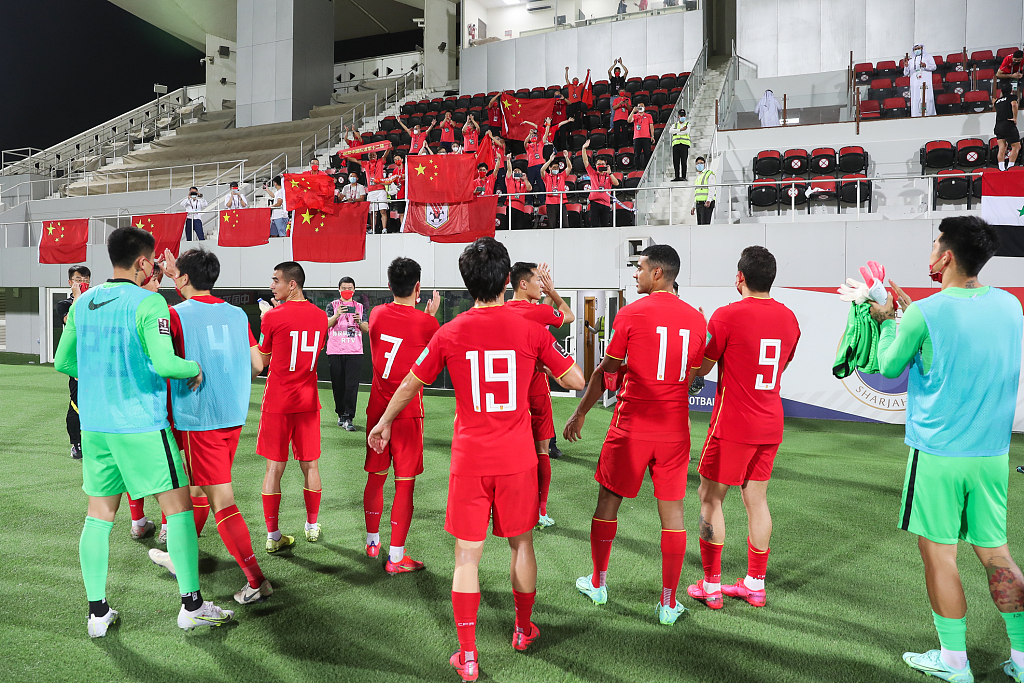 Chinese players show their gratitude to fans after their 2022 World Cup win over Syria at the Sharjah Football Stadium in Sharjah, the United Arab Emirates, June 15, 2021. /CFP

Meanwhile, the CFA president admitted that the 2021 Chinese Super League (CSL) faces a scheduling conflict with the final stage of the World Cup qualifiers and it wouldn't be easy to find an ideal solution.

"The domestic league is a very important cornerstone of Chinese football and it cannot be sacrificed because of the national team," he insisted. "But the CSL has to be suspended when we are preparing for the qualifiers. A league without the participation of national team players will lose its significance.

"We are studying three proposals for how to proceed with this year's CSL under such special circumstances, and all related clubs will be consulted with before a generally accepted plan is unveiled."

The third round qualifying draw will be conducted on July 1 and the final campaign is set to get underway from September to March. Twelve teams will be split into two groups of six in a round robin format while the winners and runners-up in each group will earn a direct berth at the 2022 World Cup.

Strangers save children trapped inside SUV during flood in China Jun 23,2021