Recently I have had some conversations with some friends in the investment field. We discussed what is the most important task for a government in the fighting against the COVID-19 pandemic: lowering of benchmark interest rate, helping the unemployed, or giving the proper stimulation to the economy? After a short debate, we reached a common agreement: the most important thing for a government in such a serious fight is containing the pandemic as quickly as possible.

So long as the virus is put under control, the economy can take care about itself. While businessmen and women have the stamina to revive their own business activities once society goes back to normal, they don't have the power owned by the government to organize anti-virus activity for the whole society.

As China has been able to contain the COVID-19 within a very short period of time and suffered the economic shutdown for less than two months, China's economy is now gradually recovering to its normal status. Recent economic data has proven this trend. Let us take a close look at it.

One of the most promising economic data is that the value adding of industrial output for the whole country increased by 5.6 percent this August compared with one year ago. This is a record high for this set of data in 2020 and is very close to its normal level before the period of COVID-19.

In 2019, the value adding of industrial output for China increased at an annual growth rate of around four to six percent. This level can be regarded as the normal standard for China's industrial sector, when there is nothing emergent that happens.

In the beginning of 2020, with the spreading of the virus and the quick response taken by China, the growth rate for the value adding of industrial output decreased by 4.3 percent in January and 25.9 percent in the month that followed. With the containing of the COVID-19 and the recovery of the economy, this growth rate gradually picked up in the summer, reached 4.8 percent in June and July and now 5.6 percent in August.

While the industrial sector of China has recovered to its normal level, the consumption sector is still under pressure. However, the worst period has been passed and now it is only a matter of time before this sector fully recovers. 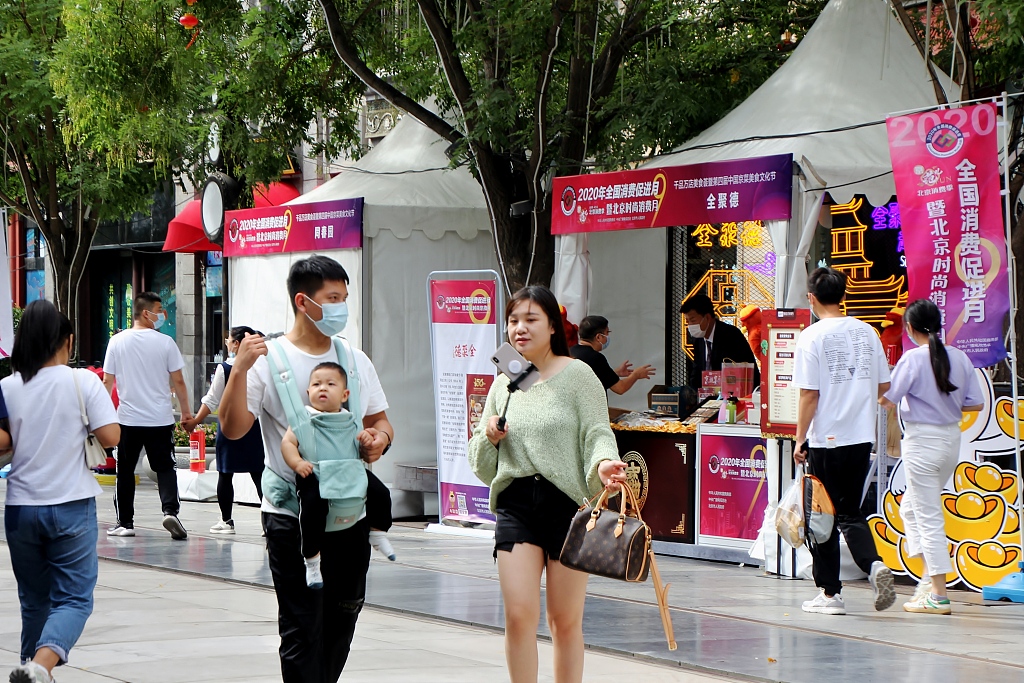 The good news is that with the elimination of COVID-19 within China's border, the consumption sector is gradually turning back. The latest data reported in August showed a 0.5-percent growth compared with one year ago. Although with the consideration of inflation, this data, which compared the nominal value of consumption, shall not be considered as a real increasing, it still gives us a positive outlook for this sector, as its worst record was 20.5 percent this February and 15.8 percent in March. The 0.5-percent growth rate reported last month is the highest data since the battle that was taken mainly in February and March.

One example can show us how the containing measures of epidemic have affected the growth rate of consumption in China. Even today, as people's lives are no longer affected by an imminent threat of the COVID-19, China's cinemas still control the amount of customers they accept by setting a free chair between seats. This means cinemas can only utilize up to 50 percent of their full capacity and means a 50-percent drop for their potential box office and therefore, a 50-percent drop for their contribution to the consumption sector.

There are multiple reasons behind this rise of online consumption. The measures taken for the containing of the virus is clearly one. Other reasons include the gradual employment of new technology, the increasing consumption capability of Chinese citizens, the construction and maturing of China's delivery network, etc. As online shopping requires much less contact between people thus reduced the possibility of infection, it has clearly been a wonderful tool for the Chinese economy amid the fighting against the COVID-19.

Overall speaking, China's economy is now gradually turning back to its normal track. With China's experience for the dealing of the virus, as well as the easing pandemic situation in the world, an optimistic attitude can be taken by people toward the economic prospectus for China.