Home to around 260, Wingello in southeast Australia had been a tranquil village before a bushfire on Jan. 4 turned it mostly into ruins.

Inside a front yard in the village, a Xinhua reporter saw burnt chairs and a table, joining the charred trees, collapsed houses and warped cars that tell the stories of homes lost overnight.

Many of the residents have sought refuge under the roof of relatives or friends. An old couple unwilling to give their names said they are in dire need of food and a place to live.

"It was pretty fast," Mark Wilson, captain of the Wingello Rural Fire Brigade, told Xinhua. "Then it rained down ashes, which set everything on fire." 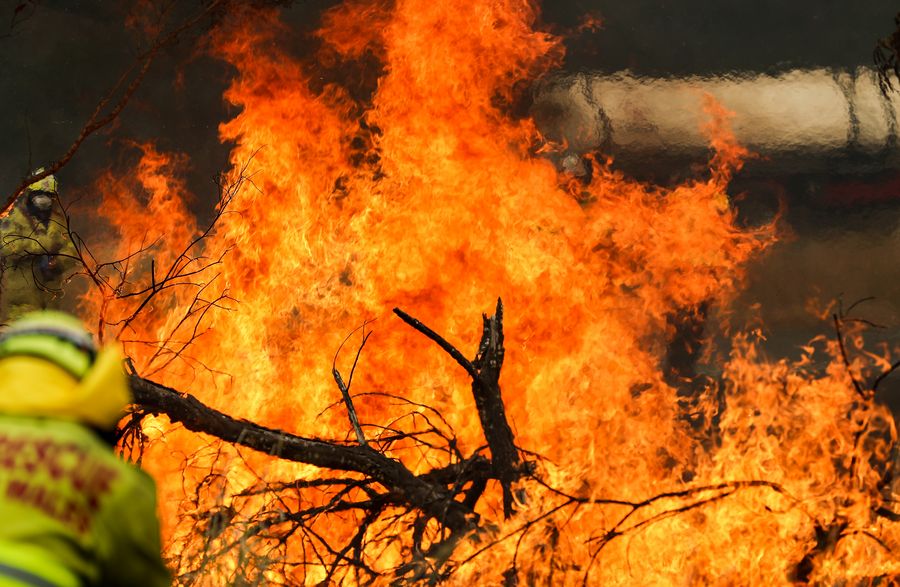 Bushfires have been burning in Australia for nearly three months now, so far killing 28 people and destroying some 2,000 homes. Over 10.7 million hectares of land -- about the same size as Iceland -- have been scorched across the continent.

Not only humans are suffering. Data by the World Wide Fund for Nature shows 1.25 billion animals have perished in the fires, including those from many native species such as the koala, kangaroo, wallaby and cockatoo.

Living near the fire-ravaged tourist destination Batemans Bay in the southern state of New South Wales (NSW), Peter James, who runs a farm with 190 cattle in rural Braidwood, said his family has left town for "a rental place" elsewhere.

"We're waiting for it to rain so we can go back home," said the young farmer. 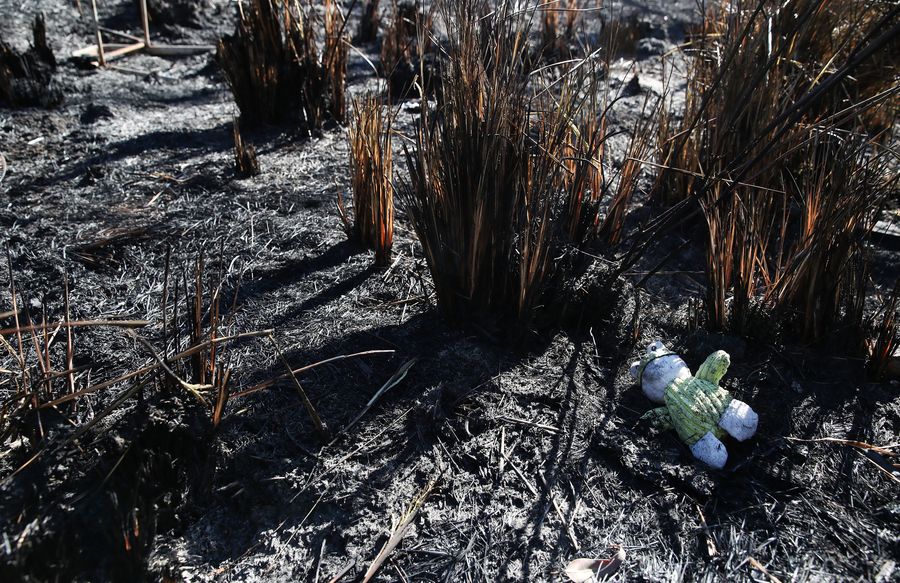 A doll lies on the field where a farmhouse was burnt by bushfires near Newcastle, New South Wales, Australia, Nov. 10, 2019. (Xinhua/Bai Xuefei)

Now should be the busy tourist season for the coastal region. At Lenoa Coleman's cafe, however, business has shrunk by some 30 percent from a year ago. "This is actually our busiest time, but nobody is coming to Braidwood," the 32-year-old said.

In big cities like Sydney, Canberra and Melbourne, people are finding themselves choking on dirty air. Canberra has been blanketed in smoke since the end of 2019, with an air quality ranked worst among the world's major cities.

Amity Raymond and her family fled the southern coast on Jan. 2, and the first thing she did after moving to Canberra was to buy pollution masks.

Such masks are rarely needed in the city. "But now, all the smoke is coming from fires outside Canberra," Raymond said. "And we need them for the kids mainly." 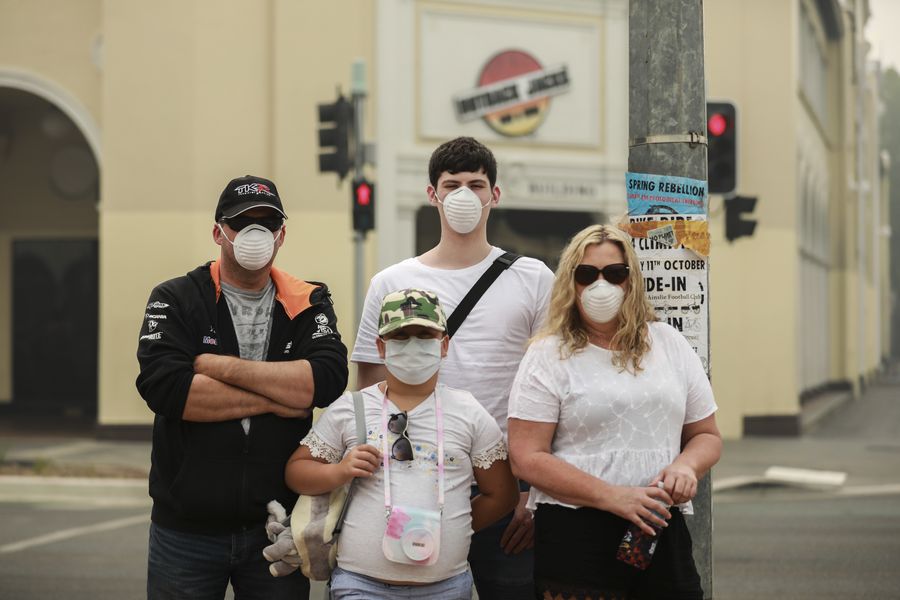 Smoke has seriously affected her family members, particularly her nine-year-old, who "has got a bit of a cough from it" and her 78-year-old grandmother, who "has to stay indoors."

The family has installed reverse-cycle air conditioners in bedrooms to clean the air, she said. "We have had to buy a special tape and door fittings ...to seal the doors to stop the smoke from coming inside."

But, she sighed: "Unfortunately, the house is so old that smoke keeps coming in through the doors." 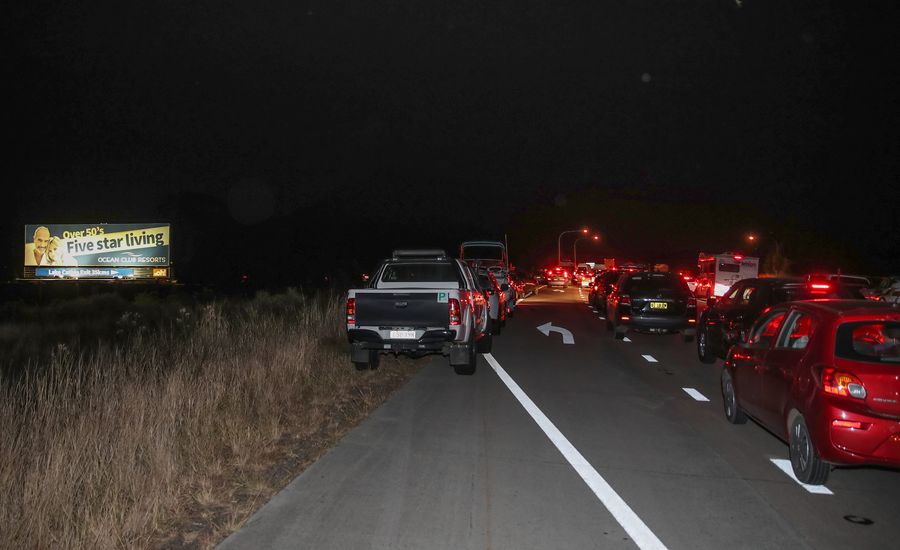 On Sunday, it announced funds worth 52.5 million dollars for mental health services in bushfire-affected communities.

"These bushfires have been unprecedented in their scale, coverage and duration," Prime Minister Scott Morrison said. "They have also taken a traumatic emotional toll on our people."

Meanwhile, the government has taken the unprecedented move of deploying up to 3,000 reservists from the Australian Defence Force to help with recovery and evacuation operations. 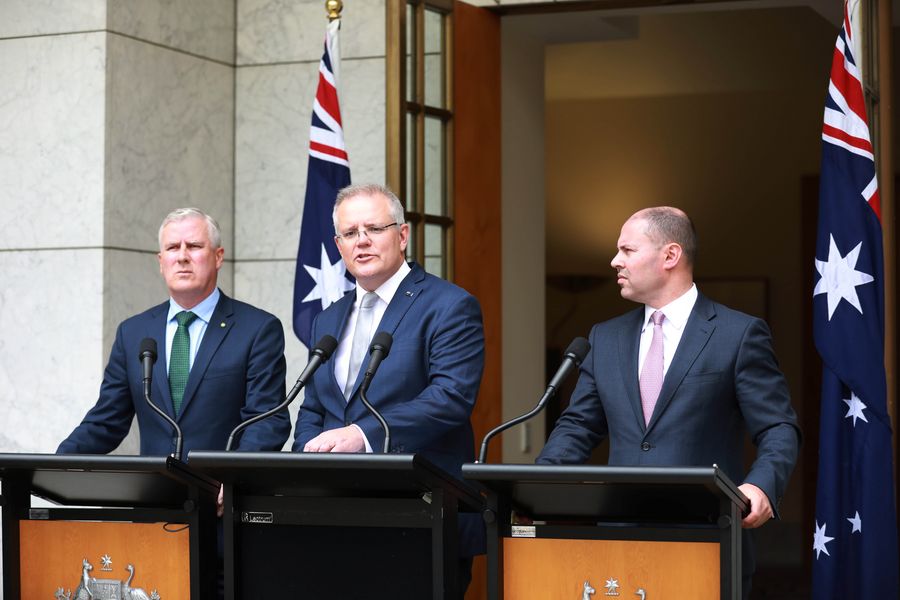 Angus Campbell, the chief of the Defence Force, said its efforts will be "focused on safety of life, evacuation of people seeking to leave affected areas, support and access to isolated communities, and support to state evacuation centers."

The Australian bushfires have shocked people around the world, prompting tremendous inflows of messages of support from both government leaders and ordinary people, and assistance in the form of financial aid or even the use of aircraft.

Defense and firefighting personnel have arrived from North America and nearby New Zealand to absorb some of the strain on local emergency services. 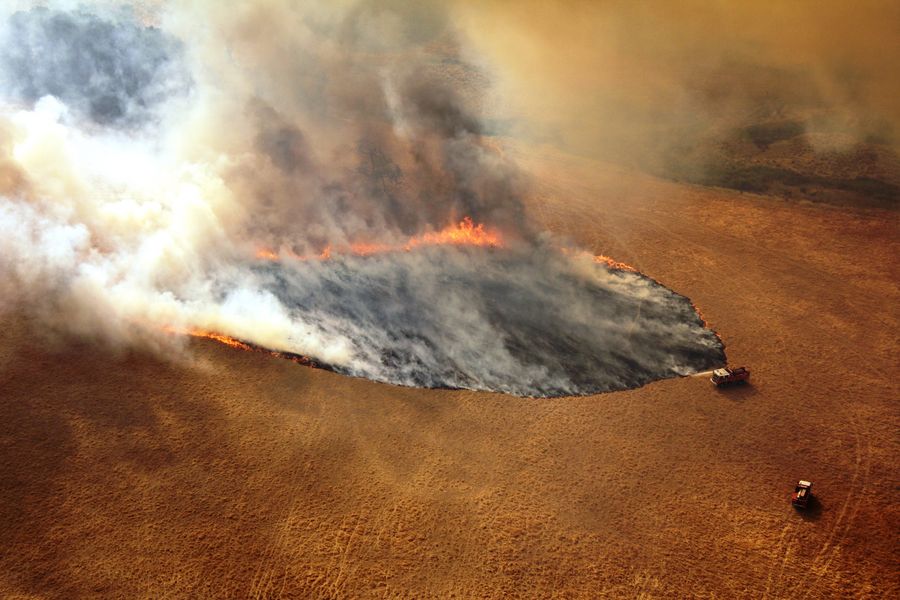 To support the affected people, a special "Rally for Relief" event was announced for the lead up to the Australian Open tennis tournament, with many of the world's top players committing to charity matches.

At Hollywood's recent Golden Globes ceremony, the bushfires were the feature of a number of acceptance speeches. Australian actor Russell Crowe, who instead of being at the ceremony to collect his award was in Australia defending his home and property from the fires, used his speech time as a platform to spread awareness.

"We need to act based on science, move our global workforce to renewable energy, and respect our planet for the unique and amazing place it is. That way we all have a future," he said. 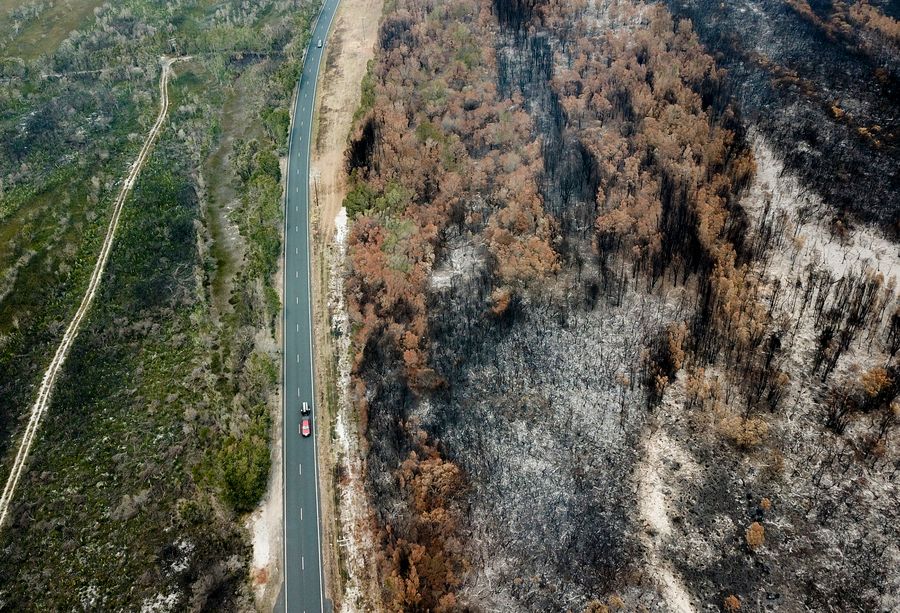 David Bowman, director of the Fire Research Center at the University of Tasmania, who has over 40 years of experience in fire research, believes that the bushfires are a cause of global warming.

He told Xinhua he believes that climate change is behind the unusually high temperatures, extreme drought and strong winds that are thought to be behind the fires.

Official records show that last year, Australia experienced its driest spring in 120 years, with very strong winds and high temperatures on some days.

Victorian State Control Center spokesman Luke Heagarty said that under these circumstances, blazes regularly become too dangerous for firefighters to even consider attending. 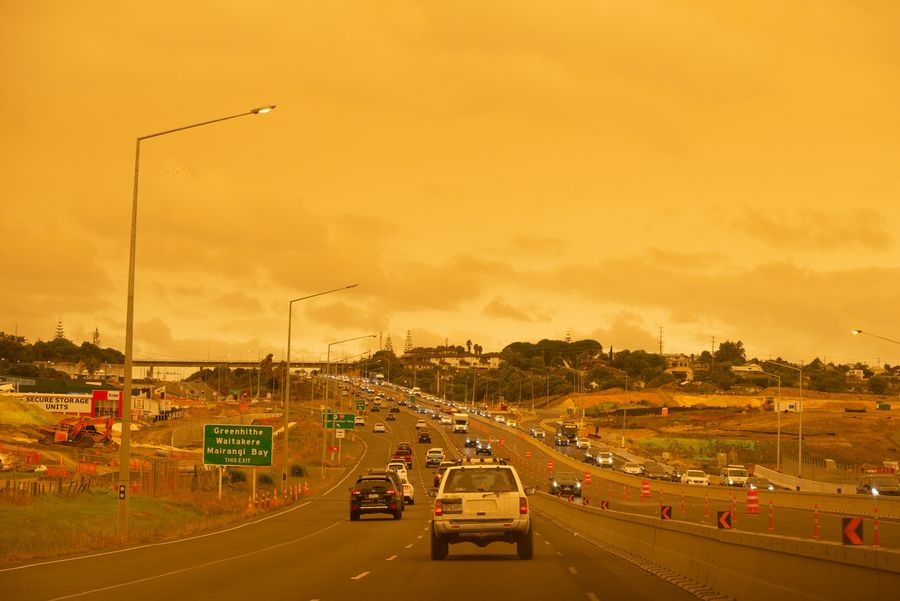 "They're always days that challenge us every summer, but we've had a number of them already and they're the days when we've seen the most significant fire spread occurring," Heagarty said.

He added that when fires reach that size they will burn, possibly for months, until significant rainfall comes.

Policies of the federal government were also criticized for failing to bring the bushfires under control.

"The uncomfortable truth is the government's response just doesn't pass the pub test," said Kevin Rudd, a former prime minister, in an opinion piece published by the Guardian. "It's been evasive, tepid, tone-deaf and, above all, too late."

A Guardian report on Sunday said Greg Mullins, former commissioner of NSW Fire and Rescue, along with 22 other former emergency services chiefs, had sent a letter to the federal government outlining the potential crisis and asking for more specialized equipment to deal with the hotter and longer bushfire periods. "They were ignored," said the report. 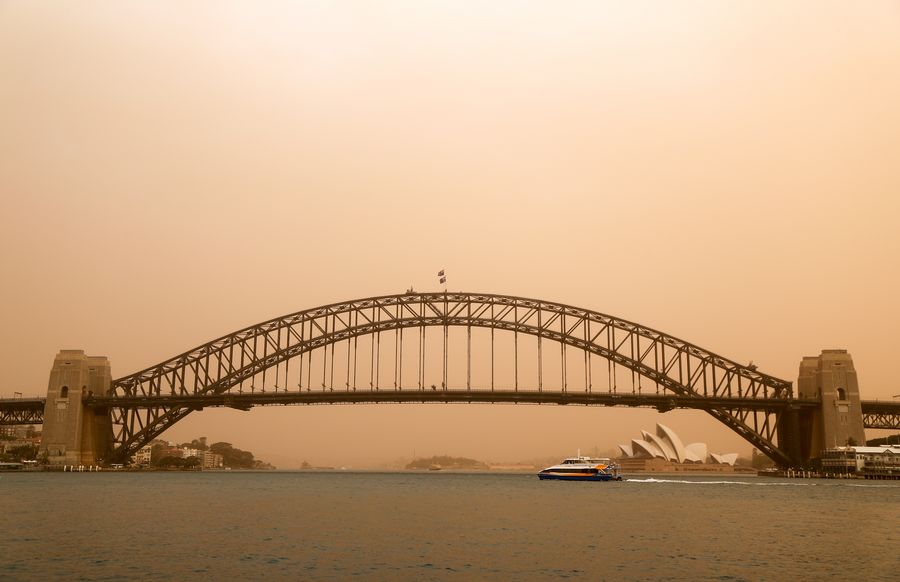 Photo taken on Nov. 12, 2019 shows the Sydney Harbour Bridge covered in smog which was caused by bushfires in northern New South Wales in Australia. (Xinhua/Bai Xuefei)

The country has committed to reducing its carbon emissions by 26 to 28 percent from 2005 levels by 2030 under the Paris climate agreement. Prime Minister Morrison has repeatedly ruled out more ambitious climate actions despite the argument that Australia, as a highly developed country, should show leadership in the area.

In an interview with ABC at the weekend, Morrison finally opened the door to "evolving" the government's policy on climate change in the future and to reducing emissions further than has been committed to.

"What I'm saying is we want to reduce emissions and do the best job we possibly can," he said.

Russian opposition wants big protest over Putin's plan to 'rule for ever' Jan 14,2020