Why my dream is to migrate to Afghanistan: A lesson in imperial migration

By carrying this ideological baggage of empire, it is no wonder that the laboring class now resents the multicultural society thrust upon them. Liberals, on the other hand, welcome refugees and the multicultural society as an innate good. While certainly better than the right, history will nevertheless consider their ideology as part of the dominant ideas of modern-day liberal imperialism.

Firstly, let us not forget, that the Western occupation of foreign lands has been justified by the same supporting ideology of human rights, which is deeply entwined with the notion of multicultural societies being an innate good. Thus, behind the mask of universal liberal human rights and multiculturalism is the historical truth that this ideology is backed by the worst crimes against humanity.

Liberals remain unaware of this because they like many "religions" divorce their ideas from material reality. That is to say, they are not able to recognize the basic fact that ideology is backed by hard power. In this case, their hard power is the Western forces that destroy development in the Global South. 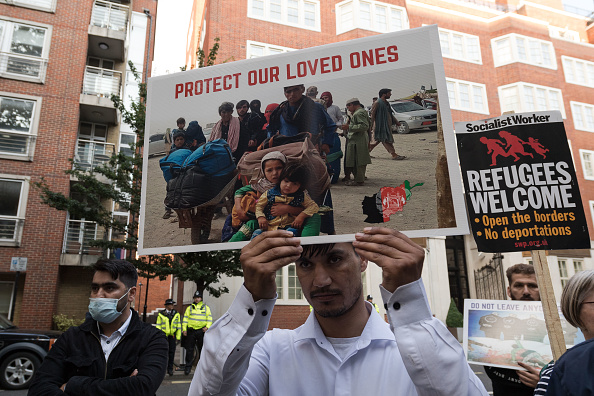 Demonstrators including Afghan people protest in London, demanding a safe passage to the UK for the refugees fleeing Afghanistan, August 23, 2021. /Getty

As the son of a first-generation immigrant, my gripe is hardly with refugees or immigration. Indeed, throughout human history, the fundamental fact has been that humans mix and move. But when migration patterns and multiculturalism are built on the unnatural foundation of poverty and war, how can we perceive it as a natural goodness? It is even used as the "fairy dust" to give Westerners a charitable feeling after their elites have committed the most uncharitable acts.

While we must truly welcome those from impoverished lands, we need to figure out the fundamental trends that bring them to the West in the first place.

In contrast, my dream is to migrate to Afghanistan. Not because I'm forced out by war or poverty but because I have an innate interest in the country and its people. I wish to move there because it could be safe and developed. After twenty years and over $2 trillion poured into its occupation, this should have been achievable. Alas, human rights wars have provided nothing but resource extraction and war profiteering.

Thus, what this world requires is an end to the forces of de-development, a community of shared values where "clashes of civilizations" become consigned to history books, and the forces of peace and development to thrive in both the West and the Global South.

Only when we have reached this stage of human development will we have the foundation set for democratic global migration and multiculturalism that we can all be proud of.