What does the WTO ruling mean for the United States?

A panel of the World Trade Organization (WTO) ruled against the United States in a tariff dispute with China. According to the finding, the U.S. was rendered to have violated rules and its own public commitment in launching a Section 301 investigation unilaterally and threatening punitive tariffs against China, which harbingered the trade war.

The ruling has both political and legal implications for the United States, and they somewhat offset each other.

The full-fledged trade war between the two sides of the Pacific, which once subjected nearly all China's U.S.-bound goods to punitive tariffs, dwindled into a tentative truce in the form of the phase one agreement on January 15, 2020.

Since its inception, the phase one agreement has served as the only link between the two countries, as the two sides' general relations have been worsening alongside the COVID-19 pandemic in the United States.

On the other hand, it has also been treated as a convenient target of political attacks as a wild call for decoupling of the two economies gains momentum in Washington.

For those who wish to see an earlier decoupling, the phase one agreement, which seems to be a means for maintaining a minimum degree of connection between the two sides, is the last obstacle they have to overcome.

As a result, there have been recurring threats on the U.S. side to rescind the agreement, and with the U.S. election around the corner, those voices have been getting even louder.

The findings, which undoubtedly undermined the legitimacy of the U.S.-led trade war, delivered a blow to the attempts of the advocators of decoupling to roll back U.S.-China relations.

Also, the ruling's timing means they have to weigh the pros and cons of a further move. After all, a revocation of the agreement would mean that they would have no economic card to play in its relation with China.

Form a legal perspective, however, the ruling will not mean that much. According to the WTO's Disputes Settlement Understanding, a panel ruling is not final. Any disputant dissatisfied with a panel ruling may, within 60 days, lodge an appeal to the Appellate Body. 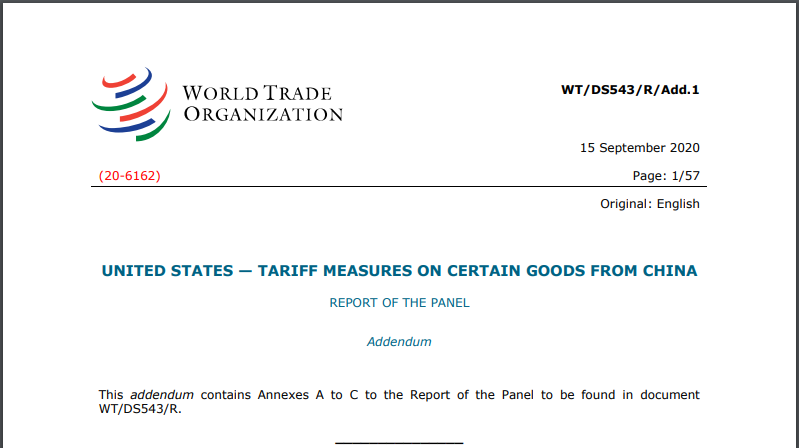 A screenshot of the Addendum of the World Trade Organization ruling on the WTO's website.

From a legal point of view, ironically, the Appellate Body, which has been at an impasse due to the U.S. blocking the judges' appointments, is still alive as a built-in body in the WTO.

While China expressed its appreciation of the WTO ruling and commended it, calling it "objective and fair," the U.S. Trade Representative (USTR), as a seasoned trade lawyer, was probably not so moved.

He may remain indifferent. But it is not difficult to find that the USTR routinely issued statements of dissatisfaction in the immediate aftermath of the panel findings. It can be expected that he will make an appellate case within the 60 days. In a word, it will not pose a serious legal challenge for the United States.

It is not meaningless to point out an option that the U.S. may consider taking. Legally, again, the U.S. may choose to ignore the ruling, as the USTR has been used to dismiss the WTO as failing to deliver the fairness and justice that the U.S. needs.

The U.S. has, on numerous occasions, threatened to withdraw from the WTO. The ruling, which is unfair in the eyes of the USTR, has given the advocators of a WTO withdrawal an extra incentive. If the U.S. were finally to leave the WTO, it could surely opt to ignore the panel ruling.